I have compiled a punch list of future enhancements for my camper which are yet to be implemented. Some are in the prototype stage while other are just concepts. There are also a number which I rejected before actual implementation.

I tried to avoid falling too much in love of any initial ideas. To be implemented I have to convince myself that the change is for the better and weight the pros and cons carefully. Amongst the considerations are:

LED task light for the kitchen counter
One recent enhancement that I envisioned but was aborted after the prototyping is an Ikea LED light fixture. While the James Cook design has no shortage of lighting I thought I would like a bit better illumination onto the kitchen counter where all the food preparation is done. The two halogen lights (which I reduced from 20W to 10W) under the cabinet throw out enough light for working in front of the burners and sink. My left arm always cast a shadow when cutting on the counter. I found this clean and sleek LED fixture at Ikea (for about $20) which I planned to mount on the top of the upper cabinet projecting out a couple of inches as a task light for the counter. 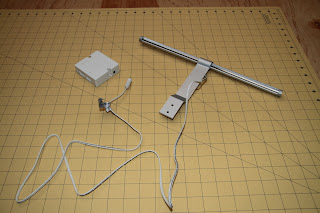 The absence of new posts in the last week were due to my love fest short trips with Tatyana in our never-ending honeymoon. While I have broadband with my iPAD writing an engaging blog is a royal pain with it and I simply would not do it. My biggest mistake with the iPAD is not go with Verizon which has wifi hot spot function and AT&T crippled it. att - i hate you! I chosen the AT&T version because it is more compatible with overseas spectrums/modulations.

7/18/12 was a relatively mellow day around Hood River, OR. It was a very good day for me trying to get back into shape after a 7-year hiatus from boardsailing.

tatyana scored a prime real estate - in the shade and a nice breeze; with the homemade sun shade deployed 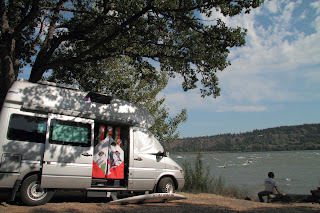