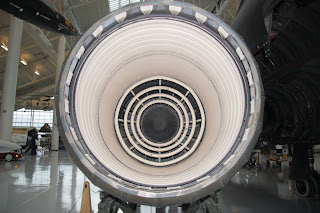 I had a colleague visiting us in November of 2009 from our office in England. He is a German working and living in England. We worked together in a project. In the weekend I play host and took him to the Evergreen Aviation and Space Museum. I didn't know he love aviation until we are inside. 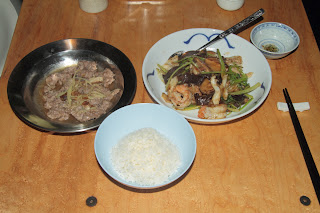 This meal is my continue effort to work down the accumulated food in the freezer. For fresh vegetable I am down to just a bit of Chinese celery. I like the challenge of creating recipes under the constraint of limited ingredients. 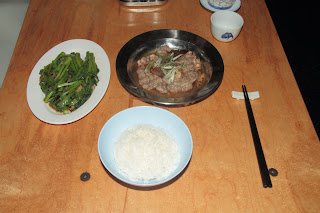 There are so many delectable dishes in Cantonese cuisine 廣東菜. For even the most well versed foodies of Chinese cuisine many classic home-cooked dishes received very little attention. With the change in time and advent of large scale agriculture the younger generation's eating habit changed significantly. Typically we eat more in portion as well as calories. In reality, in the old days home-cooked meals consist of much more vegetable and smaller portion of meat. People only east more meat in the special occasions. In Chinese there is a phase 大魚大肉 which means large amount of fish and meat. In certain context it has the same negative meanings as the word gluttony.
gluttony is one of seven deadly sins- image is linked to the wikipedia 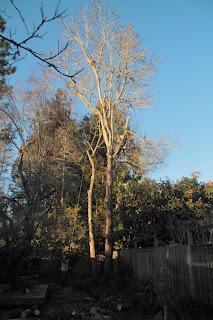 I live in a neighborhood with good amount of established trees. The air here is much better than my previous house as well as the tranquil mornings and nights. I have 3 sweet gum trees in my lot and two are getting very tall. They situated in the northeast corner of the lot. In the winter we often have very big east winds due to the Columbia River Gorge's venturi effect. There were many times that I was worry sick when traveling aboard during the winter afraid one of them would fall onto the house.

Email ThisBlogThis!Share to TwitterShare to FacebookShare to Pinterest
Labels: pnw 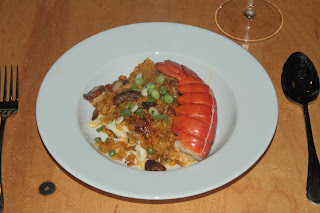 This is a spur of the moment dish that I conceived the last minute. The idea of the recipe arose from my depleting fresh cooking ingredients in the refrigerator. Necessity is the mother of inventions. While watching movies on Netflix I formulated the basic framework starting with the desire of a aromatic rice dish. I now have 4 different kind of rice to my disposal.
The thought of a fragrance rice dish made with achiote seeds immediately came to mind.

Even the most ardent foodies of Chinese cuisine, very few Westerners knows about poon choi 盆菜. It is a all in one dish served in a big basin. To be fair even for someone who grew up in Hong Kong I knew very little about this dish. I had seen them during special occasions but it was not something my parents would make. 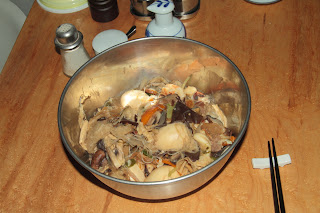