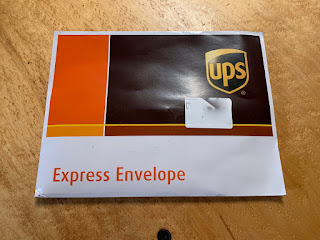 The optional physical Apple Card arrived.
It came via courier only a few days that I received my virtual card for the iPhone's Wallet.

it came inside this cardboard container 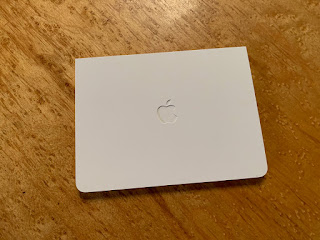 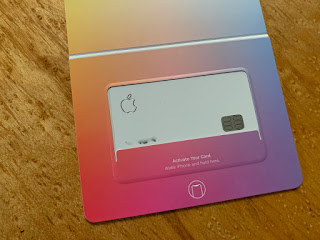 the iPhone communicates with the card via near field wireless

the only thing on it is the card owner's name on one side; it also has the contacts for the chip 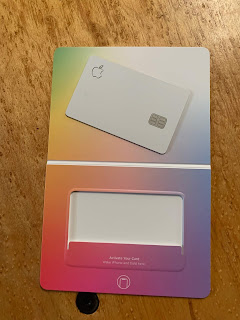 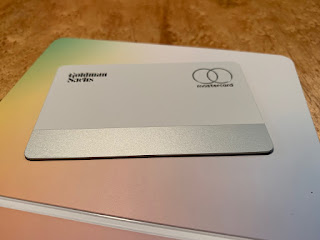 What is interesting is the card is made of a sheet of rather thick titanium. You can see the thickness in the photo above. Of course there is no card number as each transaction has a generated unique code.

What is interesting with all these tech and financial press is, virtually no one acknowledge how big this is and the implications. I have yet read someone point out the effect of the 3% rebate if you buy Apple products and services direction from the company, rather than retailers. The other thing is I wonder the terms Apple has with Goldman. I would not be surprised that Goldman agrees to pay Apple a certain one time amount for each sign up.

As always, Horace Dediu has the most insightful observations and analysis. Here is his podcast on this.

Related to Apple Card, ever since I bought the first Apple Watch I have been evangelizing Apple Pay to countless merchants that their credit card terminals support Apple Pay, Most often than not the clerk would insists it does not, and I just tell them with unshakeable confidence that it does. I would tell them they just need to enter the amount, which often is one key press on the register. 99% of the time it works. Always resulted in the clerk beaming with pleasant surprise. Most remarked that they wish more people would use it for faster (most would not say frictionless) transaction.
Posted by asia on my mind at 4:36 PM